Let's meet or talk on the phone.

Send us an email webdesign@idealhtml.com
× About Services Clients Contact

The mission at Country Road Bees is to preserve and showcase nature's diversity! 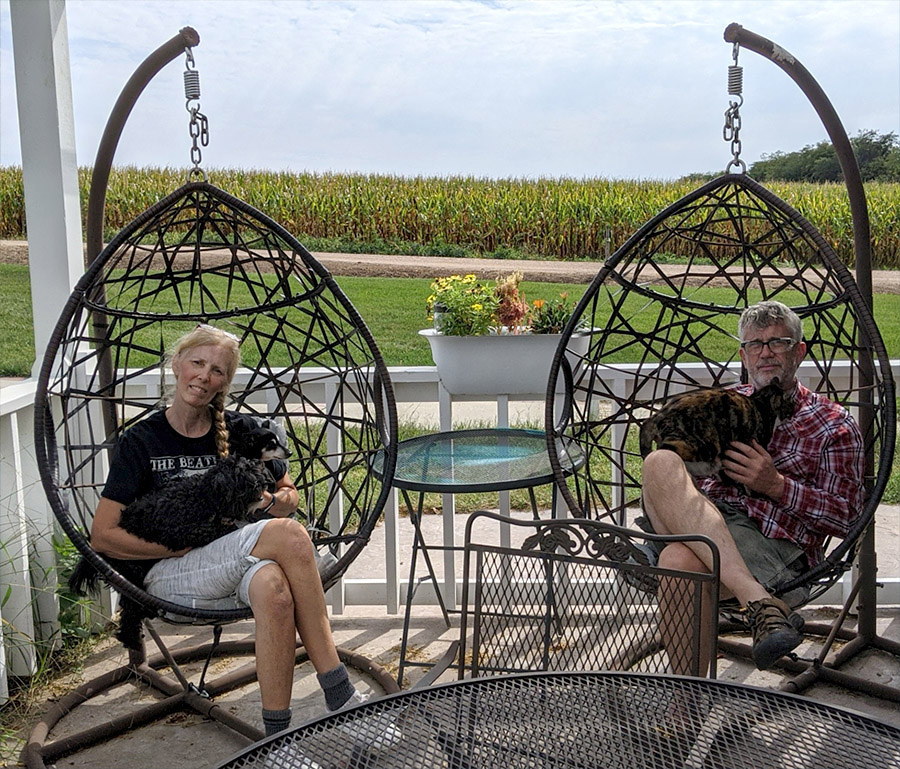 Brad and Vicki were both raised on a small farm; Brad in South Central Nebraska, Vicki in Wisconsin. As was the case with many young folks living in the 1970s farm economy, large agriculture farming was impossible. Instead, Brad and Vicki independently pursued careers in science and biotechnology. It is through these paths that they met and started a life together. However, an agrarian lifestyle never left either of them. In 2014, they found their dream acreage just outside Morse Bluff, Nebraska. It was in pretty rough shape, but as Vicki says, "it had good bones." But what do you do with 9-acres besides mow? It soon became apparent that it was time to follow their passions.

Brad first fell in love with honey as a child visiting the Nebraska state fair. Every year the University of Nebraska showcased honey from White Clover, Yellow Clover, Orange Blossoms, Golden Rod, and many more flowers. But search as he might at the grocery store, no jar matched his memories. That is until he started beekeeping as a hobby. Wow, what a difference it makes when honey is extracted gently from the comb and minimally processed before entering the jar. While orange blossom honey might not be possible from Nebraska bees, uniquely nuanced flavors, aromas, and textures are. Brad's passion is to capture those differences, not blend to sameness.

More than a sweetener!

Food scientists have identified more than 180 compounds in honey. Much like fine wine is influenced by the selection of grapes and microclimate, so too is honey. Nectar sources, rainfall, sunshine, soil, and temperature influence the flavor, color, aroma, and texture of each batch. Each year the mix of nectar will change. To ensure these differences are captured in every batch, hives are color-coded by location. Honey is harvested at the end of seasonal flows (spring, summer, fall) or unique blooms (sunflower, clover, buckwheat) and then processed as small batches. Some batches maybe hundreds of jars, some only dozens. Is there really a difference between batches? Sometimes subtle, sometimes dramatic, but yes, always a difference.

Each apiary is assigned a color. The patterns help the bees find their home hive.

Humans cannot live on bread alone, nor bees on a single source of nectar.

Although many of the honeys produced at Country Road Bees are dominated by a single nectar, Brad intentionally places hives where multiple nectar and pollen sources are available. This ensures the bees find the nutrients needed to maintain strong and vibrant colonies. Nutrition is more critical now than ever with increasing pressure from pesticides, fungicides, herbicides, and viruses borne by Varroa destructor mites.

A field of native and naturalized wild flowers at the Chromy Apiary.

It’s not just about the Honey

At Country Road Bees, all animals are important. Whether it’s the barn cats, free-range chickens, or their faithful guardian dog Henley.

This year the Geothermal greenhouse designed by Citrusinthesnow.com will be soon operational. No doubt citrus trees will be planted, but Vicki enjoys hot Yoga on a cold winter’s day too. Hmmm, maybe orange blossom honey in Nebraska is possible?

Sometimes, it is just about a cup of coffee.

Country Road Bees also serves the area by simply being a place of solace. One of the nicest things Brad and Vicki hear is, “it is so peaceful out here.” Do you need to escape city life for a few hours? Come on over! There are always activities available to recharge your personal battery.

Winter, it's not so bad.

Thank you for a fabulous 2022 Asparagus season! The field is now at rest untill 2023.